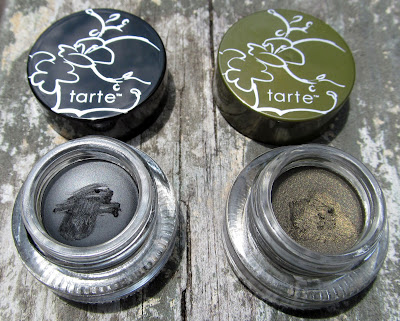 As part of it's Amazonian clay range of products, Tarte offers these potted liners in six different shades.  I've got black and green to show you today, and I received both of these liners are part of sets that I purchased.  They are billed as both a liner or a shadow and come with a double-ended brush for either liner or shadow application.

I tend to prefer eye pencils over liquid or potted liners, but I've got to say that these are pretty easy to use in that capacity.  They are soft enough to pick up pigment and spread smoothly, but it does take several swipes to get an opaque line.  The problem I had attempting to use these as a shadow is that they are so pigmented and just thick enough to make them hard to blend or sheer out, which gives a darker look than I'm comfortable with.  So, liners they will be for me. 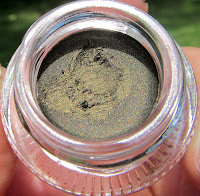 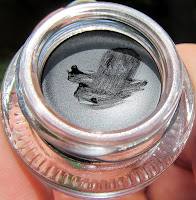 These do indeed hold up to the waterproof claim and once set, they are smudge proof.  The black is matte, whereas the green has a lovely coppery gold shimmer.  Black liners are a bit to harsh for my coloring, so I doubt mine will get much use.  The green, however, is gorgeous!  I did receive a purple clay liner in another collection a while back, and I have to say that when I went to use it had completely dried up.  Like a rock.  I had opened it maybe once or twice, so it wasn't getting exposed to air on a regular basis.  I'm hoping that's not the case with these, but if they do dry out I'll update this review.

The Amazonian Clay Waterproof Liners retail for $22 and that includes the brush.  Tarte does have a trio called Jewels of the Amazon that includes both of these shades along with a bronze for $39, so if these colors appeal to you, that would be the better deal.
Posted by Lulubelle at 6:00 AM