Starting at the top, here are swatches of Midnight Rodeo,  Midnight 15, Vanilla, Flow and Chase. All of the colors in the 15th Anniversary Collection are new, but I was interested to see how similar they might be to some of the UD colors I already own, so I did some side by side swatch comparisons.  First up is Chase vs. Suspect.  Suspect is from the Rollergirl palette, which I previously reviewed here.
Chase is a shimmery medium bronze.  Suspect looks slightly more brown to my eye. 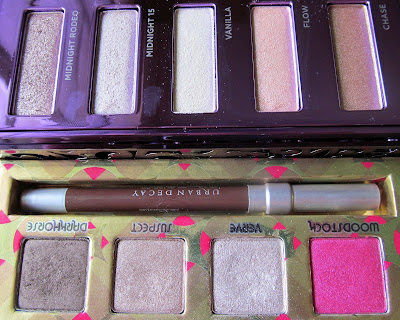 Here is Midnight 15 vs. Verve, also from the Rollergirl palette.  Verve is just a smidgen lighter, but they are very close.  Midnight 15 has a small amount of micro glitter, but it is very fine and quite subtle.  You can make out some of the glitter along the edges of the swatch.


The formula on the 15th Anniversary colors shown here are indeed smooth and buttery, with the exception of Vanilla, which was more coarse and grainy.  Strangely, however, I've been using Vanilla a lot, as it makes for a lovely highlight shade when using more gold or yellow toned colors.

The column of beige, fawn, and cream shadows in the 15th Anniversary Collection, which I refer to as "the neutrals", is almost like having a mini Naked palette. 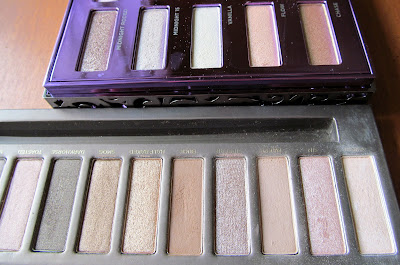 The first five swatches are the first column from the 15th Anniversary collection and the last five are from Naked 1.  No dupes to speak of, and a nice addition to my collection of neutral shadows.

Next up, I'll look at the second column of colors, which I refer to as "the brights".

Disclaimer:  I purchased all of the products mentioned.
Posted by Lulubelle at 6:00 AM