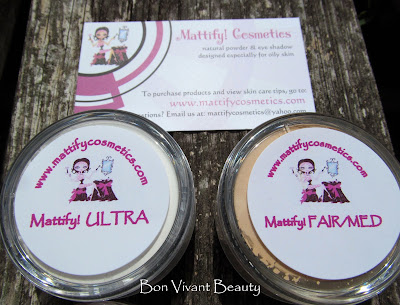 Disclaimer:  Products provided for review.
All opinions are my own.
If you've read my blog for any length of time, you know I've got super oily skin.  When I say super, I mean SUPER.  When I was a teenager I had to wash my face several times a day, I was such an oil slick.  As I've gotten older I'm grateful that one of the benefits of oily skin is that I have relatively few wrinkles, but it still gives me challenges with makeup.  Still. 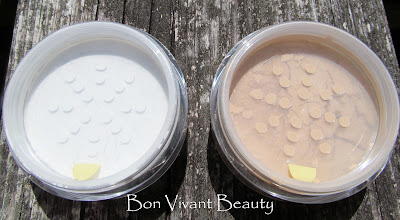 So, I was excited for the opportunity to try out some products aimed specifically at oily skin.  First, let's look at Mattify ULTRA, a transparent powder that can be worn in a variety of ways:
I've got to admit when I first saw the powder I thought "oh, it's like Make Up Forever's HD Microfinish Powder".   Kind of, but it's got some ingredients beyond silica, which is responsible for that soft focus finish.  Mattify ULTRA also contains oil absorbing Kaolin clay, cornstarch, rice powder, and titanium dioxide.
I've never considered using a powder as a primer under my foundation, so this intrigued me the most.  I've been a bit ambivalent about using silicone based primers, so the idea of using something silicone free does appeal to me.  I've now tried Mattify ULTRA with a variety of foundations, and I've got to say it works really well as both a primer and a setting powder.  I chose two of the foundations I like but find a bit too "dewy" on their own for testing Mattify ULTRA, and the powder definitely helped cut the shine factor down significantly.
It also helped with oil absorption, giving me some extra time before I needed to blot.   The comparison pictures are of me wearing Dinair's airbrush foundation (which I apply with a regular blush) with and without Mattify ULTRA.  You can see a major difference in the level of "glow".  I had used a different setting powder in the  photo below, but the shine is already coming through.
Mattify! Cosmetics has great information on their site detailing each of the products and the best ways to use them for your skin type (dry skin can wear them too).  I especially appreciated the realistic claims made for their products - for example, they note that Mattify ULTRA will probably give very oily skin a shine free finish for about 4 hours and about 6 hours for those with oily skin.  I got about 4-5 hours, which is really good for me in comparison to other products I've tried.  So, no unrealistic claims of "24 hr shine free" here.  I exaggerate, but you know we've all seen them.
Mattify! Cosmetics also makes tinted powders, of which I tried the Fair/Medium ($16.50).  It did not give me enough coverage to wear on it's own as a foundation, and also ran a bit muddy on me.  There are only two shade options currently available (fair/medium and medium/dark), but given the coverage wasn't enough for my skin, I prefer using the Mattify ULTRA over a liquid foundation anyhow.
I also tried a concealer in Medium ($10), but it was too dark with a strong yellow undertone for my complexion.  It was nicely pigmented, however, and with the right color match could work nicely.  Of these three products, however, Mattify ULTRA is definitely the star for me!  It's now my go to primer for those foundations that have proven too dewy for me in the past.  It may not seem like much, but that means I can now use some really nice foundations that just didn't work for me because of the shine factor.  Mattify ULTRA is also reasonably priced at $12.99 for a 30 gram jar, further making it a workhorse for me:-)

Tomorrow I'll have two more Mattify! Cosmetic items to show you - a blush and an eyeshadow.
Posted by Lulubelle at 6:00 AM