Nail of the Day: Whirled Peas 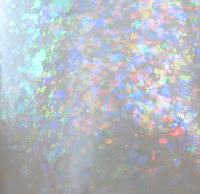 Flaky or flecked nail polishes are hot right now and Finger Paints just released the Special Effects limited edition collection of five different flaky polishes.  Available only at Sally's Beauty Supply, I went to several different stores as they were already a bit picked over, and ended up getting three of the five - Twisted (pictured), Asylum, and Motley.  If you want to see how all the polishes look, the PolishAholic has some great swatches.  Coveted by many nail polish lovers, flakies make great top coats, especially over darker polishes.  Flakies also have the extra appeal of not being as hard to remove as most glitter polishes.

Maybe because it's been rainy this week, I was drawn to the army green murkiness of OPI's Uh Oh Roll Down the Window from the Fall 2011 collection.  Nice formula and two coats achieved opaqueness. 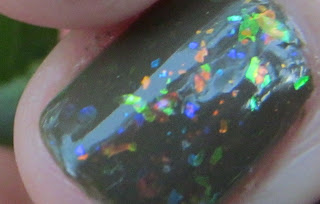 While I wasn't sure how Twisted would look over Uh Oh as I didn't try any test swatches, I only used one coat and the flecks do show up nicely!  I'm not sure how long the Finger Paints Special Effects will be available, so if they appeal to you, best look for them now.  I paid $5.99 each for mine. 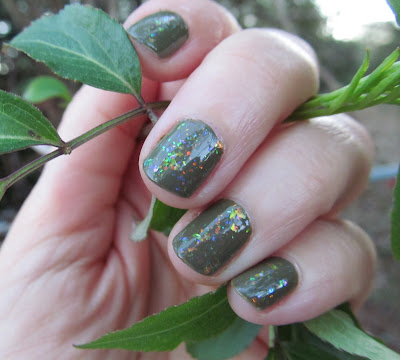