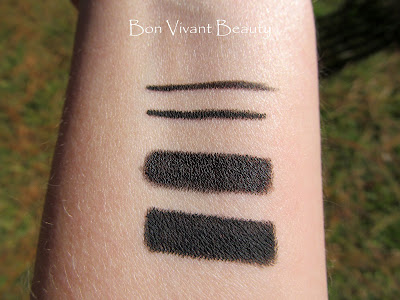 Urban Decay 24/7 eye pencils are some of the best performing eye pencils I've come acros, and Perversion has justly gotten rave reviews for being the most intense black you are likely to find in a pencil version.  Little did I know I had a dupe already in my collection!

Can you tell the difference?  If I did not know which I had applied first I'm not sure I'd be able to tell.  Both are intensely black, smooth, creamy, and yet set to a smudge resistant finish.  So which is which?

The top line for both the thin and thick lines is Sephora + Pantone Universe's Meteorite, which I acquired as part of the limited edition Color of the Year 3 pencil set (no longer available) that included Meteorite, Chestnut (matte dark brown), and Tangerine Tango (orange shimmer).  I believe the set cost $15, so Meteorite set me back $5.  As much as I love UD 24/7 pencils, their $19 price tag can be tough to digest. 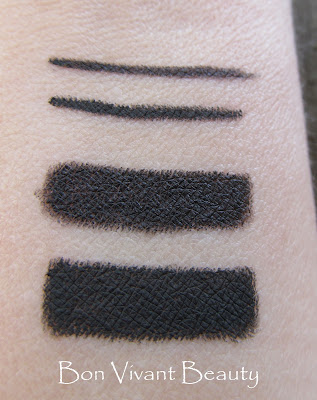 There is a slight difference in the finish, as Meteorite has a slight gloss compared to Perversion's matte finish.  Perversion does edge out Meteorite just a smidgen in being the more intense black, but both performed equally well in initial smudge tests.  I say initial, because about an hour later I decided to rub both vigorously to see if there truly was no smudging going on, and I got a surprise.
Meteorite flaked pretty significantly compared to Perversion when strongly rubbed.  I'm not sure how that would translate when wearing them on the eye, unless you rub your eyes a lot.  My impression, however, is that Urban Decay has the superior formula.  I still think the Sephora + Pantone Universe pencils are pretty impressive though, especially at their price point.  I'd try some more if the colors appealed to me.

Disclosure:  I purchased this.
Posted by Lulubelle at 6:00 AM