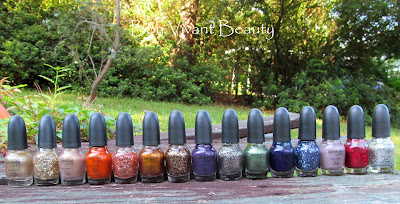 Disclaimer:  I purchased these.
As you may already be aware, Sephora by OPI (SOPI) polishes are being discontinued and have been on sale for a while at sephora.com and in store.  I've also heard of them popping up at outlets like TJ Maxx.  Sephora sale prices have typically been $4.50/bottle, but you can also buy three for $10.  I bought 3 last Sunday, but the colors were already starting to thin out with pinks and reds being pretty much gone. 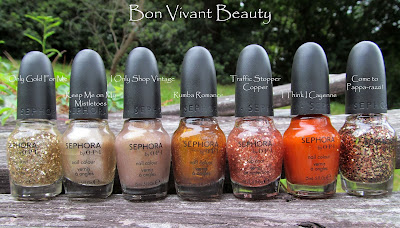 I pulled out my SOPI polishes so I could see what others I might want to pick up before they are gone forever.  Um, it's pretty easy to see what color families I'm partial to :-)  I've got 15 of the regular sized bottles and 6 mini's, but what surprised me the most was how many SOPI glitters I have - definitely the majority of the glitters in my collection. 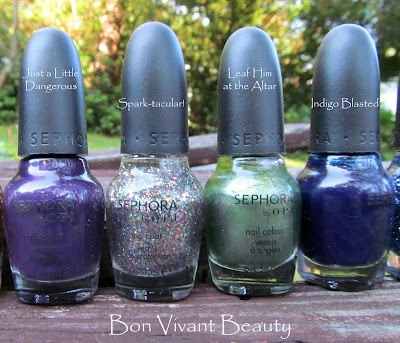 Sephora will be replacing SOPI with their Sephora X brand, which I have not tried.  SOPI's were originally priced higher than regular OPI polishes at $9.50 per bottle, which is why I'd sometimes see them called $OPI on nail blogs :-) 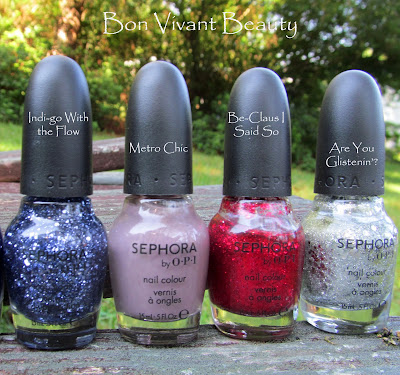 I did like the formula on these and found them to be good performers, by and large.  It was also easy to pick up some of the special collection sets on sale at some point, which is harder to do with regular OPI polishes.
For those reasons, I'll miss SOPI polishes and ordered 12 more online.  In tribute to their demise, here are some of manicures I've done with SOPI polishes.

Linking up with The Nail Files hosted by Well Shut the Front Door!

Email ThisBlogThis!Share to TwitterShare to FacebookShare to Pinterest
Labels: discontinued, Sephora by OPI