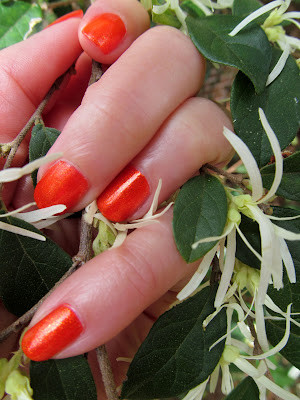 China Glaze's Capital Colours polish collection is inspired by "The Hunger Games", a trilogy of books that is being released as a movie on March 23rd.  Names of the polishes are based on the districts depicted in the post-apocalyptic former United States, and this vivid beauty called Riveting is a tribute to district 3, the district known for it's technology, specifically electronics and explosives.  An interesting book series and worth checking out if you haven't read them yet. 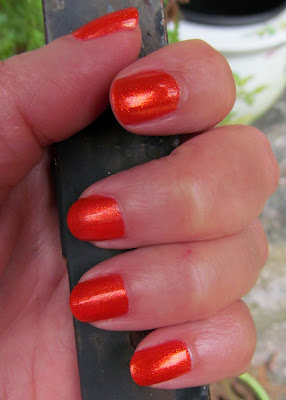 The formula of Riveting was quite good, thin but coverage was smooth and opaque in two coats.  The main thing I had to watch was making sure I did not have too much color on the brush since it was a bit runny.  Orange with gold flecks, this color glows on your nails and is not for the faint of heart - it's an attention getter!

All twelve of the polishes are pictured in this post, along with more information about the upcoming movie.  I picked up seven of the colors that appealed to me:  Riveting, Electrify, Mahogany, Luxe and Lush in full size bottles from Sally's Beauty Supply, and Fast Track, Smoke and Ashes, Agro and Luxe and Lush (again) in the mini-set available exclusively at Ulta.  Full size bottles are $7 at Ulta and $6 at Sally's.  My Ulta did not have the collection in store yet, but a sales rep told me last week that they were hoping to get them soon.

Email ThisBlogThis!Share to TwitterShare to FacebookShare to Pinterest
Labels: China Glaze, Colours of the Capital, Riveting