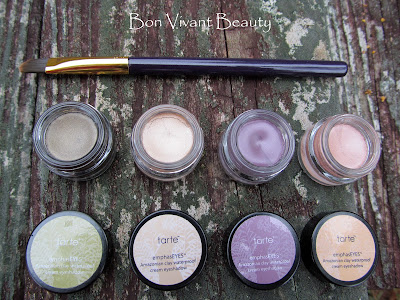 I believe this set was one of Tarte's holiday offerings via QVC last year, but it popped up at Sephora recently in the sale section, and I had to have it.  A good cream shadow can be so versatile, from an all over lid color to a liner to a base for powder shadows.  While Maybelline's Color Tattoo eye creams have been satisfying my need lately for cream shadows, I've had some misses along with hits there.  Maybe the Tarte cream shadows can fill some of that void? 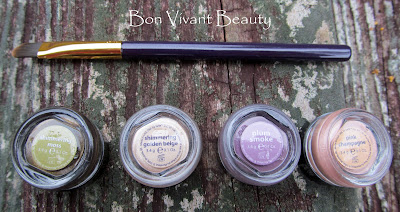 Specifically, I was less than impressed with Maybelline's Color Tattoo LE color in Mossy Green but loved Barely Beige, which I know some people had a hard time finding.  The Tarte set has two similar colors in Shimmering Moss and Shimmering Golden Beige, as well as Plum Smoke and Pink Champagne  So let's have a look! 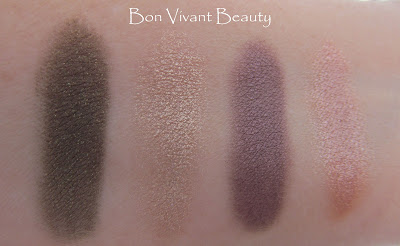 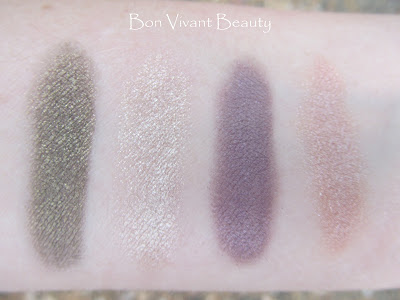 The Tarte eye creams do a good job of applying smoothly and without patchiness, which is something I've sometimes had problems with the Maybelline Eye Tattoos.  I'd say the pigmentation is a bit better with Tarte.  These can be applied in a sheer layer or built up to an opaqueness that gives complete coverage.  They do set quickly, so you have a limited time to work with them.  Once they set, they do not budge.  Wear time is a good 8 hours for the most part, and then I experience some flaking.  Plum Smoke had the worst performance, with the lighter shades performing the best.

The brush applicator included in the set works well, which is a good thing, as the pots are too small for finger application.  As a shadow base, they are fantastic and this is how I've been using them the most. The photos directly below show the shadows on their own. 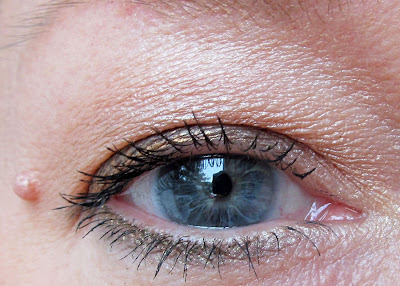 Shimmering Moss and Plum Smoke are part of the permanent colors but Shimmering Golden Beige and Pink Champagne were limited editions to this set.

I had to use 3 layers of Mossy Green and still had some patchiness, so I'm calling Tarte's Shimmering Moss to be the better of the two.
Both of the beige shades were great, no complaints.  As of right now, the Tarte Precious Gems set is showing up at places like Amazon for about $50, but I was able to get it from Sephora's sale section for $29 at the beginning of December.  Hopefully it will come back in stock at some point, so keep checking if you are interested.  The singles retail for $19, and there are five colors currently available.