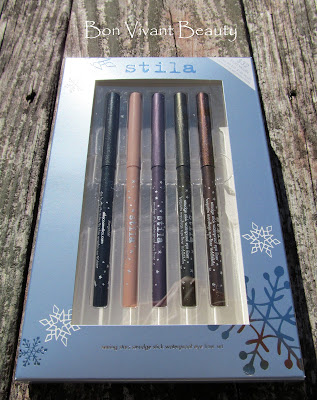 Was anybody able to pick up the stila Seeing Stars smudge stick set when Ulta had it in store for $15 before the holidays?  It was a one day deal, and even though I had just ordered it online from ulta.com (at the still reasonable sale price of $19.60), I decided I would pick up one for my mother for Christmas. 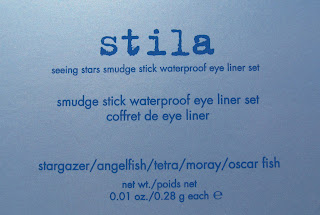 So, I got to the store at around 9:30 am to find only one on the shelf, which I was lucky enough to get.  Don't you hate it when stores run specials with such low stock numbers?  One of the sales people told me they had to be very creative with stock, as it wasn't like they were getting replenished even with the specials. 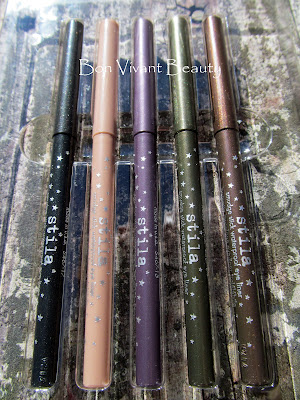 But, on to Seeing Stars.  I've become a fan of stila's smudge sticks after having tried a few that were included in eye shadow palettes.  These are propel up pencils, but be aware that you can't rewind them.   I consider that to be a design defect, personally, but that's my only criticism.  These are soft, nicely pigmented, smudge proof, and have a subtle shimmer which makes them visually interesting without veering into glitter territory.
Angelfish and Oscar Fish are the only two colors that I don't see on the current list of smudge sticks on stila's site. 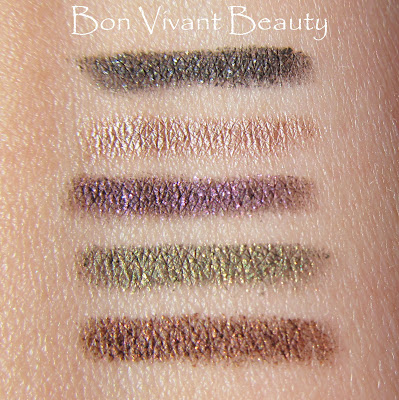 Smudge sticks are normally $20 each, so this set contains $100 worth of product.  The normal retail is $32, so if you were lucky enough to get one at $15, you were very lucky indeed!  I bet we'll be seeing it on sale again before very long.

Disclosure:  I purchased this.
Posted by Lulubelle at 6:00 AM