Fancy Choco by Alice and Peter

The third cupcake perfume by Alice & Peter up for review is Fancy Choco:


Watch out! There is no turning back.  A modern duo of mint and citrus take flight to an isle of tropical fruit.  Exquisitely exotic yet tart in flavor peaches and apricots balance the pure scents of of freesia and lilac.  A spontaenous soft amber unleashes a rich trail of wild imagination lead by a confection of deep dark chocolate and creamy caramel with a hint of tonka bean.

Even though chocolate is listed as a base note, it's the first thing I smell after I spritz it on, but it dissipates quickly and is followed by a lime citrus note.  My nose seems to think the chocolate note smells more like Tootsie Rolls anyhow, which is not unpleasant, but not necessarily how I want to smell throughout the day. Perhaps the chocolate will reappear at a later phase in a different form? 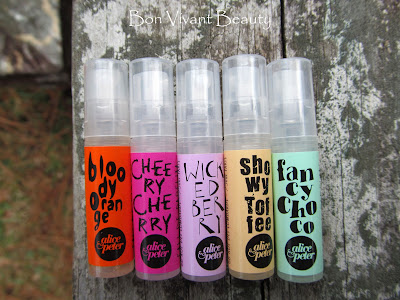 On the plus side, Fancy Choco is not overly sweet and has more of a refreshing vibe.  On the negative side, it fades incredibly quickly on me.  I do manage to smell a lovely, smoky, almost incense aroma when I sniff my wrist an hour later, but it's so faint and only on one wrist.  So disappointing, because Fancy Choco had a lot of potential based on the short amount of time I was able to detect a scent!

I don't think my body eats perfume, as I've got others that do not fade so quickly.  I sprayed Fancy Choco on my scarf, hoping I would be able to smell it that way, but I can detect nothing there either.  As delightful as Bloody Orange, Cheery Cherry, and Fancy Choco have been when first sniffed, they just don't last on me.   Here's hoping Wicked Berry or Showy Toffee break that trend!

Disclaimer:  I purchased these.

Email ThisBlogThis!Share to TwitterShare to FacebookShare to Pinterest
Labels: Alice and Peter, perfume