"He wove through the crowd when suddenly his heart quickened. That scent. It was hers. He had worn it first until she stole it for herself. Now, there she was before him and the magic of years past came flooding back in a moment." 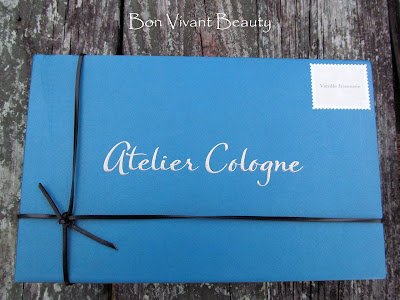 I've been on a bit of a perfume/cologne kick lately, and Vanille Insensée Cologne Absolue by Atelier Cologne is my most recent acquisition.  I first became familiar with Atelier Cologne when I received a sample of their Orange Sanguine in one of my Birchbox's and fell in love with it.  Vanille Insensée was a blind buy, however, motivated by a combination of a discounted gift set and Birchbox points that were burning a hole in my proverbial pocket. 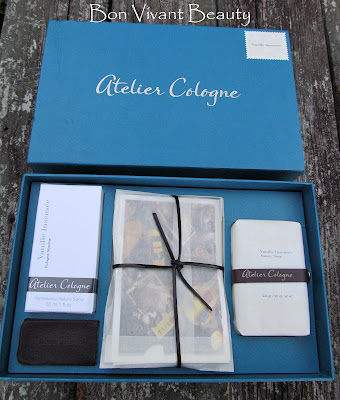 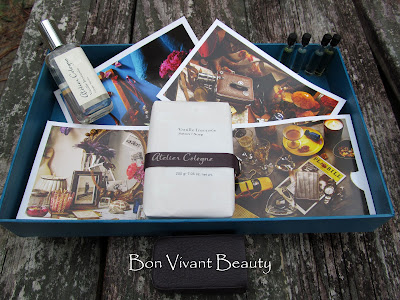 Hello there!  What my nose translated as sharp were those citrus top notes combined with the coriander.  Interestingly enough, I read that some people react to the smell of coriander negatively, which is likely a genetically inspired response.  Yes, NPR even did a piece on this.  Notice that the vanilla doesn't actually show up until later, and combined with the oak wood, oak moss, amber, and vetiver, make Vanille Insensée a unisex scent that could be worn equally well by either gender.  The postcards you see in the box are the images that are evoked from the fragrances they represent. 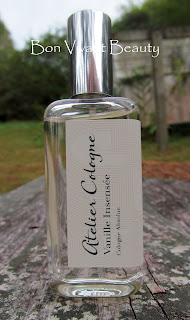 I've got to admit, I had to sit with this for a few days to see how I felt about it.  Now that I have, I really like it.  I wore the leather strip that enclosed the heavily scented soap as a bracelet one day, and will spritz it with the cologne and do that again, as I really enjoyed sniffing it throughout the day.  Vanille Insensée is unique, refreshing, dare I even say bracing, and I'm definitely enjoying wearing it.  Since the concentration of the cologne is 15%, the wear time is a bit longer and I can still smell it after 4 hours of wear and having washed dishes, which is pretty good.  The soap in the gift set is hard milled, vegetable based, lathers luxuriously, and contains aloe vera and shea butter.  Very nice indeed.

The Vanille Insensée gift set retails for $80, and I got mine at Birchbox for $26 with the discount and points.  Gotta love Birchbox!

Disclosure:  I purchased this.