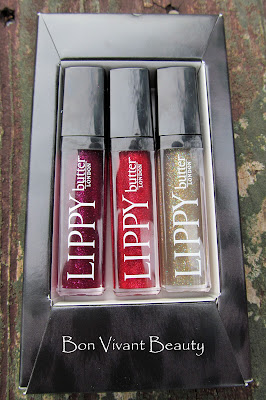 I went back and forth on getting the Butter London Holiday Lippy Trio for what seems like forever.  Reviews for the glitter lippy's were few and far between, although I did manage to find a few pictures of people wearing them.  I finally caved and got the trio that contains Fiddlesticks, Chancer, and Fairy Cakes. In the tube, these are some seriously pretty glitter glosses!  I was most excited about the raspberry glitter Fiddlesticks.

Chancer is a straight up red glitter that looked like it would pack a wallop of color and possibly a metallic lip look. 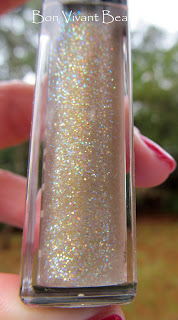 Fairy Cakes also held a lot of potential, as the delicately colored iridescent glitter could be a lovely topper for a variety of lip colors. 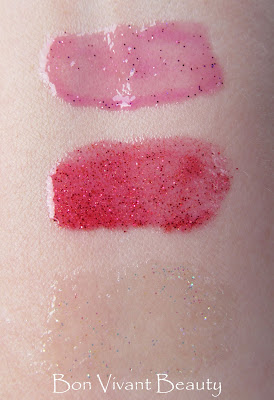 Ultimately, I found myself a bit disappointed with these.  They are described as glosses that deliver sheer, shimmery, high gloss color, and while technically true, I was underwhelmed.
I was disappointed in Fiddlesticks because the glitter is very sparse and ended up looking more like flecks of debris than an intentional look.  Pretty pink color, though.

Chancer was the best in terms of density of glitter, but I also get a rather blotched appearance.

Fairy Cakes barely registers, although you can see the sparkles if you enlarge the picture.  The pictures were taken in both indoor and outdoor lighting, which accounts for the vast differences in skin color.

These are a heavier gloss with a definite tack, which means they do last for several hours. I could not feel any grit and they were comfortable to wear.  The scent is a non-offensive vanilla cake batter that dissipates fairly quickly.  Perhaps I'm just having buyer's remorse for spending $34 on gloss that I definitely did not need and whose first ingredient is mineral oil, but for me they just did not live up to the beauty hinted at in the tubes.

Disclaimer:  I purchased these.