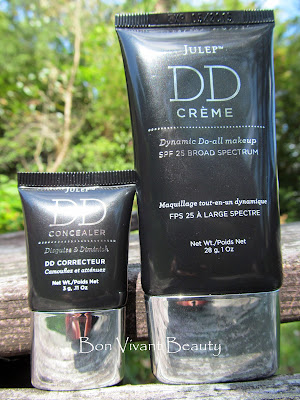 There was lots of hype and not a little angst regarding Julep's recently launched DD creme.  The hype came from Julep extolling the wonders of the first ever DD (dynamic do-all) creme, and the angst from Julep Mavens wondering "what color do I chose?!?!".  The colors appeared to lean a bit dark based on online swatches, but I decided on medium and rolled the dice.
So was the hype warranted?  Not really, in my opinion.  The DD creme performed along the lines of a tinted moisturizer and provided less coverage than the Asian BB creams I've tried.  It did a decent job of smoothing skin and evening out skin tone, and the SPF25 is adequate in light of some of lower levels (or none at all), in American BB creams.
The color was definitely warm with yellow undertones, but is sheer enough that it worked fine with my fair but warm skintone.  The creme itself, however, did not work well with my oily skin, as it was a bit too "dewy".  After a few days of wear I noticed more skin eruptions than usual, which makes me not inclined to use it going forward.

The concealer was the lightest shade, but was fairly dark and I doubt would work for those with fairer skin tones.  It was nicely pigmented and did a good job job of covering flaws.  The tube felt mostly empty, however, which was disappointing considering how small the tube was to begin with.
Which brings up the the main failing with Julep's DD creme and concealer launch:  there appears to have been great inconsistency in the amount of product contained in tubes.  I've read numerous online accounts of people who say their tubes were almost empty.  My DD creme felt about half full, but I attributed that to the size of the packaging vs. the amount inside - 1 ounce.  However, some people weighed their tubes using a food scale and they were indeed "light" in content.
Now, I'm not sure what Julep will be doing going forward regarding carrying the DD creme and concealer, but at least one person was told by customer service that the lightest shade of the creme was no longer available and they would not be restocking.  Did Julep decide to scrap what has quickly become a problem product that was generating a fair amount of dissatisfied customers?  The ratings on Julep's site for the DD creme is 1.5 stars, with the concealer receiving an abysmal 1 star. 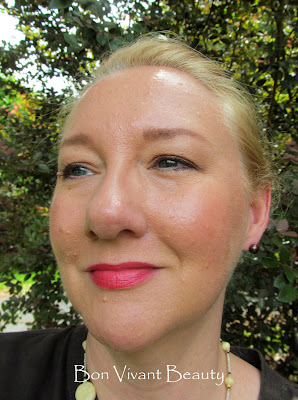 I guess only time will tell, but I'm at least hoping Julep does something regarding quality control for forthcoming products, considering they are committed to expanding beyond nail polish into makeup and other beauty items.  The DD creme is $36 ($28.20 for Mavens) and the concealer is $32 (25.60 for Mavens).  Fortunately, mine were part of the June Maven upgrade so I paid a fraction of that.