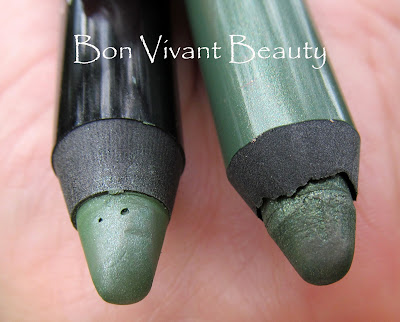 I've got a thing for green - I just seem to naturally gravitate towards that color.  I also seem to be collecting quite a number of green eyeliners and shadow pencils, having bought both Rimmel's Gossip Green and Urban Decay's Narc in the last week.  They are different enough in color to justify having both, however one was an epic fail.  Which one was it?

First, let's talk about Rimmel's scandalEYES Gossip Green.  It is a darkened sage green that applied easily and smoothly as both a liner and a shadow.  Wear time was a respectable 8 hours before I started noticing fading and some slight creasing.

Urban Decay's Narc is a darker green with gold shimmer, and of the two, is the more complex and interesting color.  That is, if I could get it to apply.  When I first got the pencil and tried to swatch it, absolutely no color would transfer to my arm.  So, I pressed hard, and promptly broke the tip off the end of the pencil.  Hoping against hope that the pencil would work better once I sharpened it....but not so much.
I can make multiple passes before it will start to lay down color, and that's on my arm.  I can't/don't want to press that hard on my eyeball. It also was not smooth and did this build up thing once I got it applying color - just an all around epic fail.  I've had other Urban Decay shadow pencils that performed just fine, so I'm not sure if this one pencil was a dud or if Narc was an underperformer all along.  I do know it's currently on sale for $11 at Urban Decay, so perhaps it's being phased out.  Sales at Urban Decay usually mean a product is being retired.  Sadly, sale items also cannot be returned to Urban Decay.
It's too bad, as Gossip Green and Narc complement each other, if only Narc would play nice.  Gossip Green is less expensive at regular price ($4.49) than Narc is on sale ($11), so the clear winner between these two is Gossip Green.  Score Rimmel!

Disclaimer:  I purchased these.
Posted by Lulubelle at 6:00 AM