September Julep Classic with a Twist: Sophie and Brandt 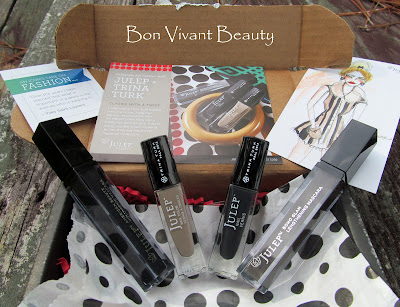 I recently subscribed to Julep's Maven program, a monthly subscription service where you can receive two Julep nail polishes and a little something extra for $19.99.  Box contents are guaranteed to be worth $40, plus it's a way to try newly launched colors at a discounted price.  Julep teamed up with the designer Trina Turk for September's color selections, the majority of which are bold, almost primary colors.  The profile I chose is Boho Glam, but this month I elected to receive the Classic with a Twist box with it's more muted colors. 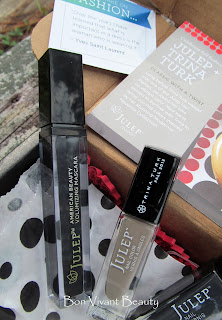 The Classic with a Twist box features a mushroom taupe cream called Sophie and a soft black cream called Brandt.  The something extra in this month's Classic with a Twist is a black volumizing mascara, which I was really excited about, even though I have a plethora of mascaras.  I was given a free add on since it was my first month, and I chose the brown lengthening mascara.  For many years I wore brown mascara exclusively, but I don't currently have one in my collection so I was really happy about this option. 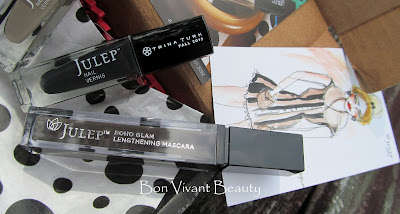 I used the black mascara yesterday, and I've got to say I'm impressed so far!  I'll post reviews of both the black and brown mascaras after I've a better feel for them.

I was curious if I had any dupes in my collection for Sophie and Brandt.  Here is Sophie (middle) with OPI's You Don't Know Jacques (top) and Sephora by OPI's Metro Chic (bottom).  Both You Don't Know Jacques and Metro Chic have a slight purple cast, whereas Sophie leans more gray/brown.  Sophie seems more opaque at first pass as well, based just on the card swatches. 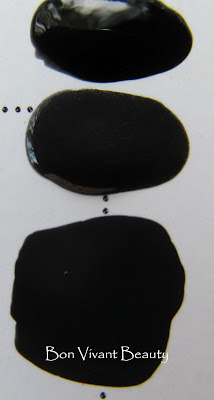 Here is Brandt (bottom) compared with Sinful Color's Black on Black (top) and OPI's Suzi Skis in the Pyranees (middle).  Suzi leans blue, but is close to Brandt.  I think Brandt will look black on (as all the card swatches do), but in the bottle it looks like a super dark charcoal gray.

This was a great first box!  I have limited experience with Julep polishes, but I'm hearing rumblings based on this current batch of polishes that their formula has improved.

Disclaimer:  I purchased this.  If you'd like to learn more about the Maven program, you can go here (affiliate link).
Posted by Lulubelle at 6:00 AM

Email ThisBlogThis!Share to TwitterShare to FacebookShare to Pinterest
Labels: Classic with a Twist, Julep, nail polish