I don't think I've ever seen a solid primer before!  It was easy to blend and can be worn both under makeup to extend wear and over makeup to eliminate shine and freshen makeup.  I'll be sticking this in my purse for the over the makeup option.  It contains Vitamins C and E to fight free radicals - nice touch.

The makeup stick was a good match for my skin tone.  However, it settles into my pores and no matter what I tried, I can't get it to blend out well.  I've tried using my fingers, a non-latex makeup sponge, and a brush.  The brush worked the best but it's still not that great.  I'm disappointed, as I really tried to make it work.  Interestingly enough, the Real Deal Foundation Stick was rated 8.5 by beauty editors on Total Beauty's review of the 12 best foundations.  However, they did note in their review that it wasn't the easiest foundation to work with. 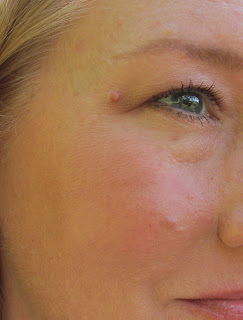 The blush is such a pretty color, but I also had the problem of it settling into pores.  Applying with a brush helped and I think I'll be able to use this provided I do careful blending.

The concealer is highly pigmented, and a tiny bit goes a long way.  I tried it under my eyes and it settled into creases, but almost everything I've tried under my eyes does that.  It's a bit too dark for an under eye concealer anyhow, so I'll use it for blemishes and other discolorations.

The makeup bag, although somewhat small, is uber cute and nicely constructed so it will get used.  I considered returning the kit because of the foundation, but given I can use the other items I've decided to keep it.  The Real Deal Travel Collection is available in six different foundation shades and is $29.99 at Laura Geller.  I could have sworn I got mine at Ulta, but I don't see it on their web site anymore.
Posted by Lulubelle at 6:00 AM