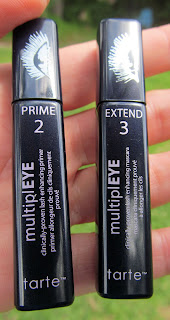 I'm fortunate in that, even though I wear contact lens, eye primers don't seem to bother me.  It's a good thing, as I need help in the lash department.  My lashes just don't show up without help, as you can see here.

I've been using Urban Decay's lash primer for the last few months and really like it.  In comparison, I found Tarte's multiplyEYE lash primer to go on a bit more gloppy, to the point where I felt like I needed to use an eyelash comb to smooth things out prior to putting on mascara.  The applicator is narrow and easy to use, so I don't think it was the problem, but more the texture and consistency of the primer.

I liked the multiplyEYE mascara brush and found it to be a nice size with bristles that easily transferred the mascara to my lashes.  However,  I again felt like I needed to use a lash comb to smooth out blobs.  This was not a carefree process and took a bit more time that I'm used to putting into my lashes.

I can't say I'm disappointed with the final look, however.  My lashes did look longer and fuller, although nowhere near the "incredible 1102% increase in the appearance of lash volume"  that is claimed on the Sephora web page for the lash primer.  But still, a definite improvement.  I had no problems with smudging or flaking either.  Additionally, this natural ingredient primer and mascara is supposed to help condition and promote lash growth when used over time.  The mascara is waterproof and required a makeup remover to completely remove.  My usual routine of using DHC's deep cleansing oil just did not do it - and it usually takes care of most mascaras.

I got the deluxe sample sized versions of the multiplyEYE primer and mascara as part of the Intro to Tarte Value Set, which is is currently on sale for $21 at Tarte.com.
Posted by Lulubelle at 6:00 AM