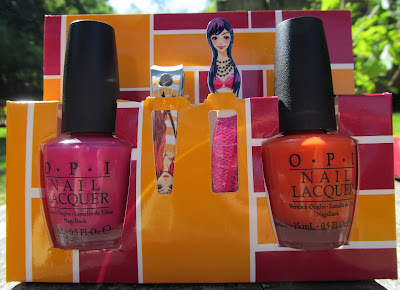 Why in the world this OPI spring promotional set is called "File in Style" I have no idea, as it includes no file.  You do, however, get a really cute set of tweezers and nail clippers along with  polishes La Paz-itively Hot and Ya'll Come Back Ya Hear? 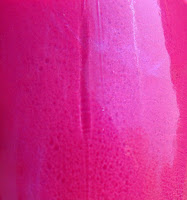 La Paz-itively Hot, part of OPI's classic colors, is a medium fuschia pink cream with a very slight blue shimmer.  I've worn this once and found it applied well and dried quickly.   Great summer color and even though this is on the cooler end of the color spectrum, it worked well with my warmer coloring.
Ya'll Come Back Ya Hear? is from last year's Texas Collection and is a medium orange jelly.  Orange happens to be hot right now, at least according to Sephora and Pantone, who have designated it "the color of the year".  Orange is one of those colors I'm oddly drawn to now, but hated when I was young.  Go figure.  Maybe I had seen too many bad 1970's color schemes, I don't know. 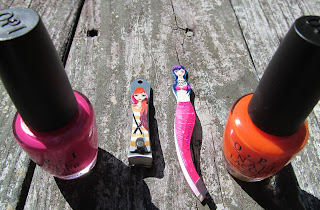 The mermaid tweezers work okay, but be careful as they are bit sharp edged.  The clippers I'll probably reserve for my toenails, as they are a bit too clunky to trim hangnails with.  Both items are super cute though and are freebies with the set, so no complaints!  This set was $16 at a spa I go to which generally overprices their items, but I've seen it online for $13-$14.
Posted by Lulubelle at 6:00 AM