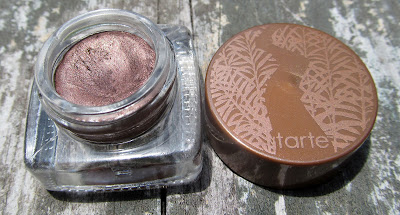 I've got one of the Tarte Waterproof Cream eyeshadows to show you today - Shimmering Bronze.  This was part of the a collection I bought at Ulta a while back.  I've been on a cream shadow kick lately and was interested to see how Tarte's entry in this category fared. 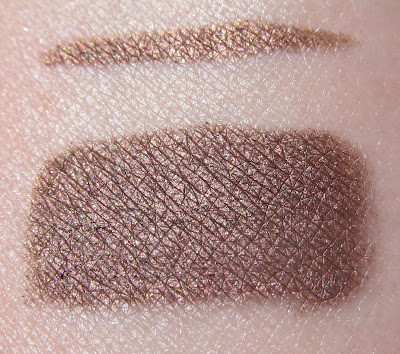 Shimmering Bronze is a rich bronze that does indeed shimmer but does not go the frosty route, which I appreciate.  From what I can tell, these are meant to be applied with a brush, although you could use your finger if you could get it into the pot.  The opening is a bit small however, so finger swiping proves a bit challenging.  I used both my finger and the double sided brush that came with the clay liners, shown here.

Highly pigmented, this could be used as a liner as well, and I was a bit flummoxed as to how the Amazonian cream shadow differed from the Amazonian cream liners, which I reviewed yesterday.  They apply and look very similar on, with one small difference.  Shimmering Bronze was slightly thinner in consistency - in fact you can see a bit of build up in the green liner in left photo, whereas Shimmering Bronze was smooth with no build up.

The other difference became evident when I swiped the swatches with a cleansing towelette.  After about 3 vigorous swipes, you can see that Shimmering Bronze is quite smeared and dissipated, whereas the black and green clay liners are still mostly intact.  The green liner smudged where it had caked up a bit.

I lined my lower lash line and my upper lash line almost to the crease with Shimmering Bronze.  These set rather quickly, and once they do, there will be no blending.  I turn to powder shadows then, which still gives a nice result.

Below is Shimmering Bronze over 2/3 of the lid with a thin line of the black clay liner.  I used Urban Decay Toasted in the crease and to blend. Wear time is good, with no creasing or fading for a good 8 hours (I always wear an eye primer).

The Amazonian Clay Waterproof Cream eyeshadows come in 5 different shades and retail for $19.  I do like them and would be interested in trying one of the lighter shades, although I'm more likely to buy them if they are part of a set.
Posted by Lulubelle at 6:00 AM