Funny story - in my head, I thought Mobile had a Macy's.  I was interested in getting Lancome's Dual Finish Powder Makeup, but wanted to test shades before purchasing.  So, I drove to the mall I thought it was at, but no, that was a Dillards.  So, I drove across the street to the other mall in town, and that was a Dillards as well!  Two Dillards right across the street from each other, but no Macy's.  There has never been a Macy's in Mobile, I have no idea why I thought there was.  That goes to show you how often I shop at department stores.  Almost never. 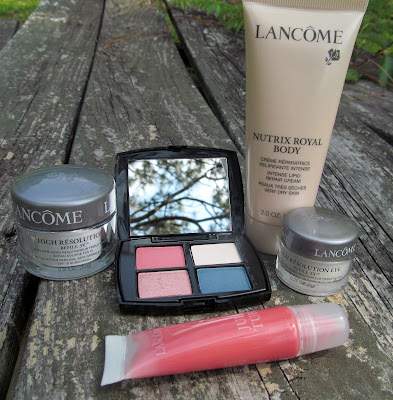 So, I tested the makeup at Dillards but ordered online from Macy's, as I wanted the gift with purchase.  Spend $35 and you got a choice of your moisturizer and eye creme, body lotion, eye product, and lip product.  I love the flexibility of choosing what you want in each category!  I also love that the gift with purchase was not extra, like they are sometimes.

I chose the High Resolution Refill x3 moisturizer and eye cream, which is supposed to help boost the synthesis of three natural skin fillers - collagen, hyaluronic acid and elastin.  Both are generous sized samples that should last several weeks.  For the body lotion, I chose the Nutrix Royal Body.  I'll probably end up using that as a hand lotion, since it's a good purse size. 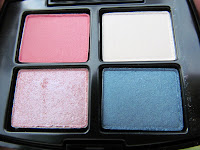 Since I've been on an eye shadow acquiring kick lately, I got the Color Design Sensational Effects Eye Shadow palette.  Starting in the left upper corner and going clockwise, the shades are Fashion Admirer (matte), Daylight (matte), Little Blue Dress (shimmer), and Off the Rack (metallic).  The finishes are how they are listed on the back of the compact.  The colors do complement each other and are not highly pigmented, providing more of a soft wash of color.  On the plus side, I did not find the mattes particularly chalky, they applied well, and these are all colors I will use.  I'm getting a faint 4th of July vibe from the swatches.

Fashion Admirer is a muted flamingo pink, which is a warm pink I can easily wear.  I used Daylight on my upper brow and it did a nice job of smoothing and mattifying that area.  I used Off the Rack blended on my inner eye over Fashion Admirer, which I used as an all over color, and was surprised to see a very slight blue shimmer.  Maybe I'm imagining it, but it was not just a pink highlight color.  I used Little Blue Dress to line my upper lash line.  I used Urban Decay's Uzi first, and then patted on this blue shadow.  I attempted a bit of a wing, which worked better on one eye than the other.  Oh well, so much for symmetry. 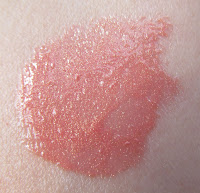 For my lip product, I chose a Juicy Tube in Coral Rush.  I've never used these before and was expecting more of a clear tinted gel lip gloss for some reason, but Coral Rush is from the smoothie line, which offers medium coverage, as opposed to the sheer jellie line of Juicy Tubes.  Coral Rush is a soft salmon peach with gold shimmer that felt nice on and wore for about 2 hours without my lips feeling dry.

So, I'm happy with this gift with purchase!  Here is my face of the day with the Lancome shadows and gloss.  I also attempted a sideways french braid, which was semi-successful.  It's a bit messy, plus it's no small feat to to get a good photograph of your head from behind. 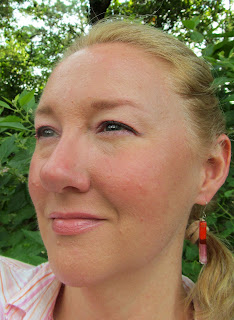 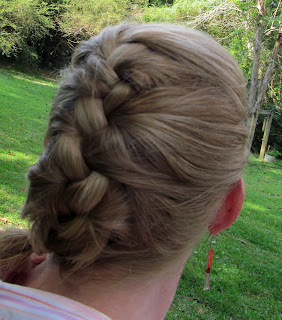 Disclaimer:  I purchased all of the products mentioned in this review.