Described on Sephora as "waterproof, pearlescent micro-glitter, liquid eyeliners (that) are super long-lasting and designed to stay put under any circumstance" - all I can say is, boy are they! 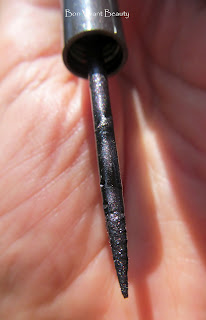 I received Starry, an iridescent gun metal, in my May Birchbox and had noted in my Birchbox review how hard it was to remove from the swatch I did on my arm.  That put me off from using it on my eyes for a while, but I finally got around to trying it and I'm officially a fan!  I've worn the liner everyday this past week and can confirm that it is indeed waterproof, budge proof, long-lasting, and stays put until you remove it.

It can go from a thin, precise line to a thicker line depending on the angle you hold the the sponge-tip applicator and was surprisingly easy to apply, even for the unskilled user (me).  You just have to be careful, as it dries quickly and does not budge, so any mistakes can be unforgiving.

So my concern was on getting the liner off, as it was quite difficult to remove arm swatches with even a biphase eye makeup remover.  I had to rub quite vigorously and it would flake off, as opposed to dissolving.  It was not as hard to get off of my eyes, but it does flake off there are as well.  I use an oil based makeup remover but that did not remove the liner from my eyes, so I followed with Lancome's Bi-Facil, which did the job.

I wasn't expecting to like this as much as I did, so count me pleasantly surprised!  These come in 8 different colors and retail for $22. 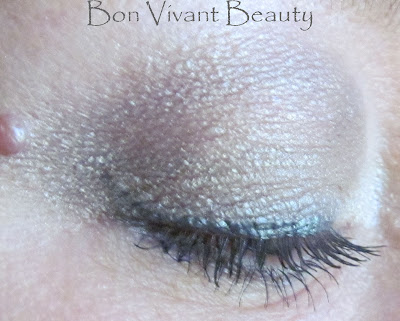 Disclaimer:  I received this are part of my May Birchbox, which I purchased.
Posted by Lulubelle at 6:00 AM